note: This is a trip report and a marathon report.  It is divided into Day 1 and Day 2. There is also a post for a review of the Hotel Fitness Center and one for the hotel’s jogging map.

I have accepted the fact that I almost never sleep well the night before a marathon.  Nor do I sleep particularly well when I’m in a hotel room solo. Sure, while I don’t have  to deal with the cacophony of Won’t Run’s snoring buzzing in my ears, I gain all the scary sounds that a once young girl conjures up when she’s alone in the dark.  On top of that, the hotel’s HVAC unit was noisy and right outside my window.  So I slept only a few restless hours.

I woke before the 5 am wake up call and tried to assess how I was feeling. I asked the proverbial Why do I do this? and pondered just going back to sleep.  Of course I didn’t. Instead, I got up and made some coffee and started eating pieces of the peanut butter and jelly bagel sandwich I’d brought with me.

I decided that I’d get ready for the Cleveland Marathon and see how it went. No demands. No expectations. I had nothing to lose. After all, what else could one do early on a Sunday morning in Ohio?  I dressed. Since it was a brisk 45 degrees, I added a few layers of throwaways to discard as I warmed up in the race. I also took some selfies (have I ever mentioned that I hate the term selfie?) I went down to the lobby and followed the slow parade of runners walking to the starting area, which was only a few blocks away.  Most were running the half-marathon or the 10K, and just a bit too chipper for me at that early hour (It seems that marathon runners are a bit more somber pre-race…).

Anyway, I arrived at the start area. 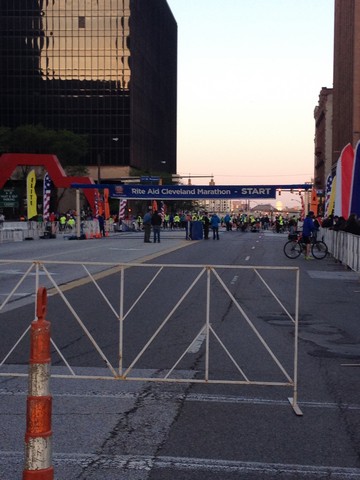 I saw one friend, Pascal and a few others with Marathon Maniac shirts on, but, for the most part, knew no one. It didn’t really matter because people were so friendly. So friendly! (I think it’s a Midwest thing and I like it!)

The race began and since the marathon, half marathon and 10k races were all beginning together, it was crowded for a while. It then spread out and was more comfortable.  I hadn’t heard the most positive reviews of the marathon so I wasn’t sure what to expect.  I did hear that the course had been revamped and was no longer hilly. To my total surprise, the marathon was gorgeous!  The roads, the houses, the scenery, the support, the mansions, Lake Erie, the mansions, Lake Erie, the mansions …. oh my, it was all breathtaking!  I couldn’t stop gasping, and for  a change, it wasn’t my asthma!!   I was astonished at the beauty of the course, and the organization of the race.

At some point, probably somewhere around 10 or 12 miles in, a fellow runner and I began talking. He was a nice guy from Michigan, and we conversed easily and ran the same pace. With the completion of this marathon, he was hoping to qualify for the Marathon Maniacs (completing 3 marathons in 3 months), a club of wonderful lunatic runners that I’ve belonged to since 2008. Neither of us were having fast days, but we ran well together, in sync, mainly in a run 4 minute/ walk 1 minute pattern. Together we got through the difficult miles. The race ended, and I headed right towards the beer area, met some other Marathon Maniacs and their families and shared stories and a beer with them.

Later on, I showered and took a walk to the Rock and Roll Hall of Fame Museum. It was closing in an hour, so I did not pay admission, but there were a lot of cool sights to be seen in many public parts of the museum, both inside and out, so I walked around and took a few photos.  The building itself is pretty impressive! And, of course, there was a rockin’ gift shop! Later, I met the Cleveland Marathon race personnel and director.  They were all having a drink at the bar at the Hyatt. We talked for a while. They genuinely wanted to hear my comments.  What a great, dedicated group.  I met some other people, went out for burgers, and called it a night.