Note: I recently traveled to South Africa on the “Etihad Mistake Fare.” I began this memoir post 2 days into my travels.

I promised myself I would try to write daily and perhaps post a sort of  daily journal entry on my blog, but fatigue gets in the way. After 2 days and nights of flights, I’m not sure who I am or where I am. Actually, as I write, I am now on a plane in Abu Dhabi and will soon be en route to Johannesburg, South Africa.

I haven’t had many snafus yet. Somehow  I was double charged $10 for my Airtrain ride to JFK on Tuesday. I had some difficulty getting my boarding pass for my JFK-CDG Paris flight from American Airlines and was certain I’d get the dreaded SSSS boarding pass but instead got TSA pre-check and whizzed right thru. I wasn’t as lucky with security in Paris for my next flight. Although you can keep your shoes on and liquids in your bag, you apparently must take your tablets out. I had no idea, and kept my iPad mini in my carry on resulting in getting my bag searched by a very thorough French agent.

But let’s go back to Tuesday night when this trip began.  I worked all day, then took the subway and the Airtrain to JFK.  Thank goodness I packed light.  I hung out in one of the two Admirals Clubs at Terminal 8, had a glass of chardonnay, and knocked my contact lens out of my eye (but found it later).  In other words, it was your basic night at the airport.

The American Airlines flight from New York to Paris was likewise unremarkable. The experience felt like a domestic flight and the meal was nondescript. I paid $123 for an extra legroom seat, but there were three persons in my row, including a passenger of size in the middle. I’m guessing it was more uncomfortable for him than it was for me so I’ll pass on the rant.

What was remarkable was that I was at the start of an exciting trip.  I’ve always wanted to visit Capetown, and I was finally going there, even if the visit was going to be way too short.

I arrived in Paris and went through passport control. There are many information booths at CDG, and I found them very helpful. I was instructed where to find Baggage du Monde, for luggage storage, which is near the Sheraton and the RER train stop at CDG. The price to store one bag for six hours is 7 Euro. I proceeded to walk downstairs to the RER train station to buy a ticket to Paris.  The train is 10 Euro each way. 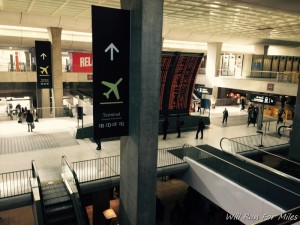 It’s amazing how easy things can be when you have good information (and conversely how difficult when you don’t).

On the train, I sat down with two men from Sydney who were traveling for over a month. One was a doctor, the other a  university professor of mathematics , and they were an interesting couple to speak to.

By the time I got to Paris it was already after 1 pm. I exited the train at Notre Dame, and sat outside the church and got my bearings.  Ah, the beauty of Paris. I lucked out on weather it was probably 80 degrees. I started walking, weaving back and forth across the Seine, up and down some streets, wishing I had more time, wavering between my memories of the streets and sights of Paris, and the acknowledgement that it had been so long that there was a lot I didn’t recognize or perhaps never knew.

I finally got to see the #locks at Pont Neuf – that is something I’ve wanted to see ever since I heard about them. The fact that they’d been moved to the side of the bridge did not diminish  my impression or love for the locks. Back on the Champs Élysée, I still couldn’t quite figure it out how to get the RER line back to the airport and did not see any tourist info kiosks or storefronts anywhere. I then saw a Marriott Hotel. I walked in, took the escalator to the first level and asked my question to the agent at the concierge desk. Voila! Not only were the employees friendly, but they gave me an information sheet listing all of the public options for transport to CDG.  (If I ever find it, I will upload it, as it was great).

I followed the directions given to me –  I made a left from the hotel, went a few blocks to the Franklin D. Roosevelt Metro station took the number 1 train to Chatelet where I changed to the RER B train to CDG.

I’ll say it again: It’s amazing how easy things can be when you have precise instructions!

At the airport I picked up my luggage, and then had the issues at security I mentioned above. Once those were resolved, I followed the signs to the lounges (“Salons”) intending to go to the American Airlines Admirals Club as I was planning to shower (I had flown through the night the night before and I’d be again flying through the night later this evening). No such luck – the Admirals Club closed at 5 p.m. Huh?

Uh oh, none of the other lounges at that terminal accepted Priority Pass, Citigold or American Express Platinum for complimentary entry.  I walked into the Etihad First and Business Lounge next door to see if there was any way to cajole myself in, as, after all, I was flying Etihad and it was a code sharer with American Airlines, so Etihad should allow entrance because The AA Admirals club was closed. Predictably, my convoluted theory was unavailing. The only option, I was told, was to pay 60€ for use of the lounge.  I splurged and I’m happy I did.  Blog post to follow.