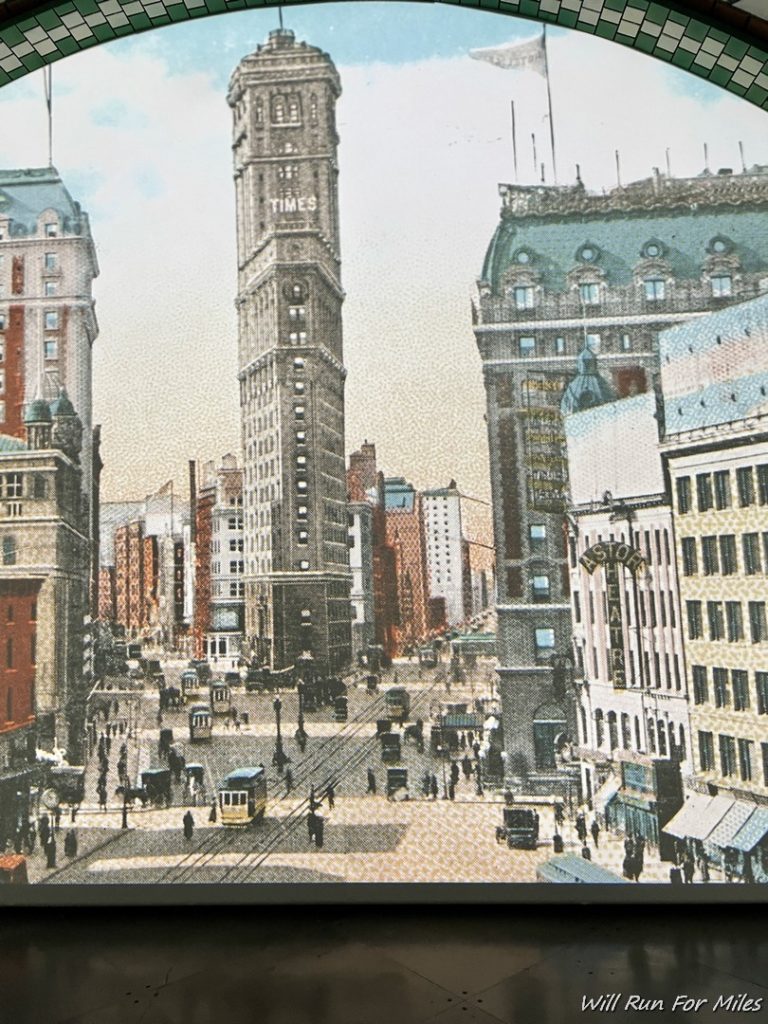 Note: this review of RiseNY is written by Dave the Traveling Music Man.

If you’re looking for the hidden meaning behind the lyric that echoes “the city that never sleeps” to the song “New York, New York,” look no further. It is a building in Times Square sandwiched among the Broadway theatre district area. Its marquee (with the arm of the Statue of Liberty on top) leads you to an oasis entitled RiseNY.

I think that RiseNY is a hidden jewel that should be on everyone’s list of things to see (if you are a visitor or even a native New Yorker). It’s an education and a World’s Fair experience combined; that you and your inner child will never forget. RiseNY doesn’t disappoint. It is the ultimate tour of New York City! No tour bus required!

When Kathy invited me to accompany her for this complimentary media event, I had no idea that RiseNY existed (I guess that is what media events are for, right?). Upon research I discovered that this New York attraction opened on March 2nd, 2022. Earlier in the day, I met with the tour manager from the Ramones and told him what I was doing later. Monte said he heard about it, but only in passing from someone. I told him I would let him know what it’s all about. Hence, this review.

The first part of the journey was to sit down in a room designed as a the first New York City subway station. Once we were all seated, we were shown a film on the history of the NYC subway system and the origin of how New York came to be. This alone was an historic education. As a former public-school teacher, I kept thinking how wonderful it would be for students to see this as an American history lesson. Little did I know that I was the one being educated! And this was only the beginning! After the film, we were escorted to another exhibit (called Manna Hatta) that showed us the beginnings of New York finance history. In addition, there were famous buildings and memorial statues. The next part of our journey dealt with Radio, Television and Music. We saw relic radios (along with a simulation of how radio was originated and transmitted). Being a musician, I was very excited to see this area. The radio and music areas would also be an educational experience for students in science and the arts. I was excited to see the Brill Building and Tin Pan Alley included. I taught a lesson on Tin Pan Alley when I found out they were considering  demolition of one of the buildings. I hope it became a landmark! It was also nice to see my friend Chris Frantz’s Talking Heads poster included in this area. 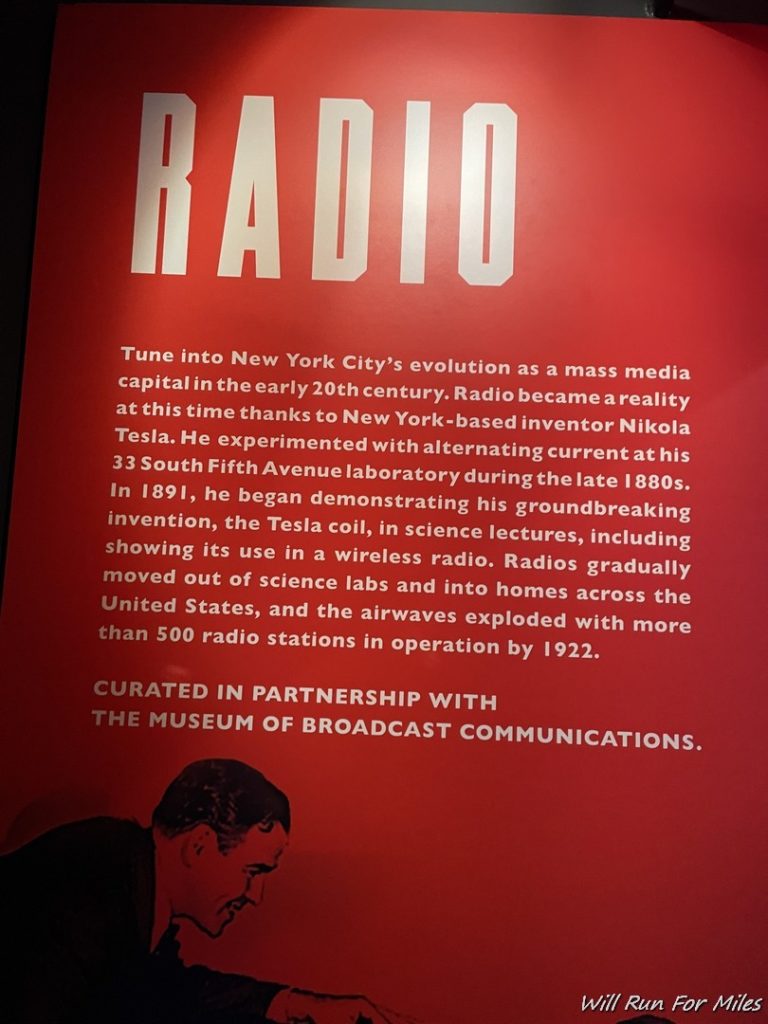 The conclusion for this area was seeing television sets of shows that had a New York City theme. I always loved the Honeymooners show. To be able to yell, “Hey Norton” out the window of this set was a particularly wonderful treat. 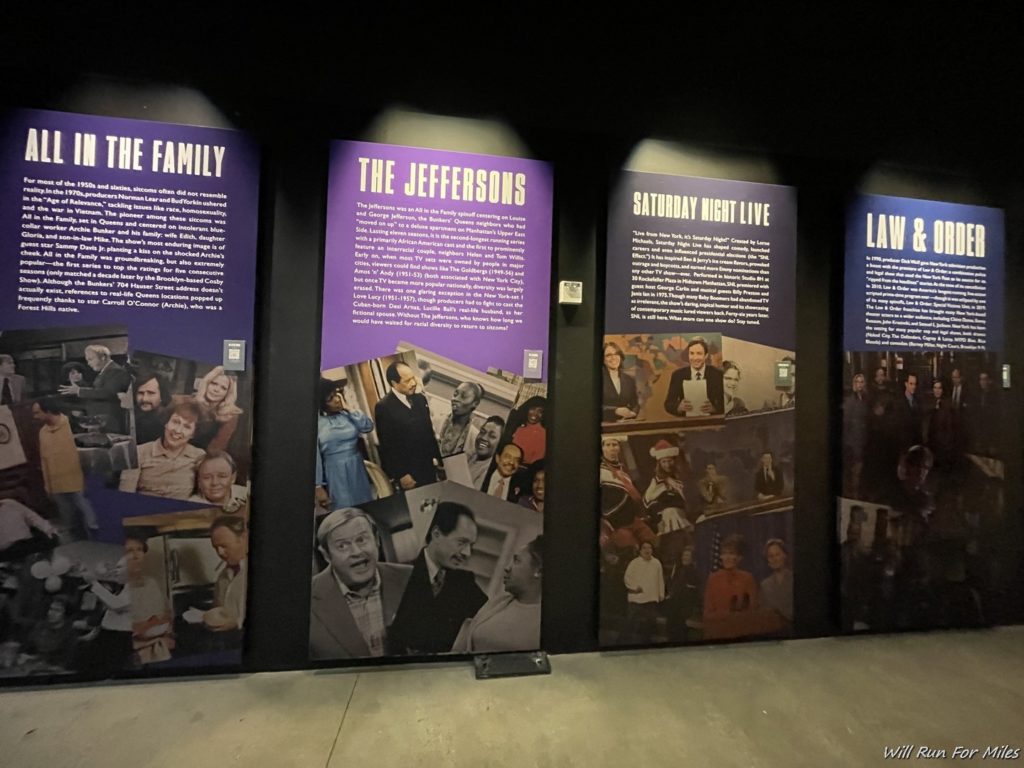 If this wasn’t enough, we then went to a simulated movie theatre. The screen showed movies with a New York based theme. For an added extra, there were two of Thomas Edison kinetoscopes in the theatre for good measure.

Of course, Broadway was a featured attraction. The shows presented were some of the ones that had the most longevity. It was dazzling to see the costumes (and clips) of these iconic shows so close. The next part of our journey was a simulated presentation of the first televised New Year’s Eve ball drop at Times Square. The host of the film gave us a thorough understanding in a comical and pleasing way. If this all wasn’t enough, the next part was the crème de la crème and culmination of this epic journey. That being, a Disney-style immersive ride soaring over the sites of New York City. Not being one for amusement park rides (I get nauseous on rides) I had to close my eyes from time to time. However, when I did have my eyes open, it was something to behold. It was an exhilarating experience going through the five boroughs on this ride. Unbelievable! (I wasn’t able to take photos during this phenomenal ride over New York City, so you’ll just have to use your imagination).

A nice ending on this remarkable evening, was going on a terrace (in the shape of Lady Liberty’s arm) to take pictures with the exciting background (in real time) of Times Square.

I have been to a lot of events in my time, and RiseNY is one that rates in the top tier. I would not hesitate to recommend this to anyone. I’m even thinking of going back with Monte, Chris and Tina the next time they come into the city. Rise up people to an experience you’ll remember forever! 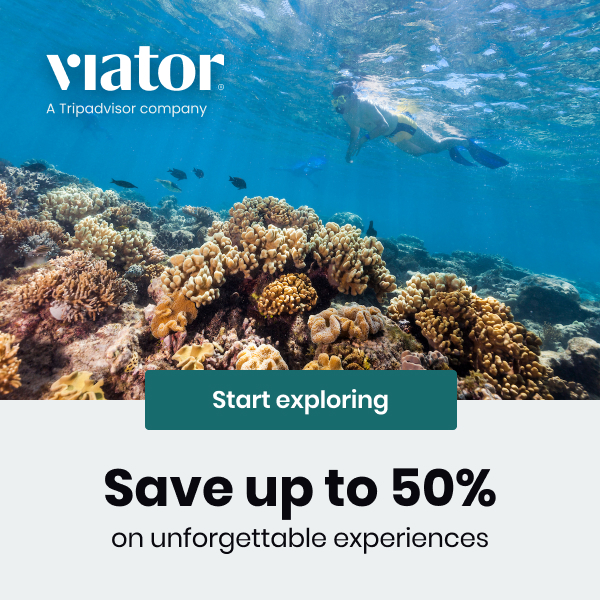