The choice to run the Louisiana Marathon was an extremely excellent choice.

I first visited Baton Rouge two years ago.  Initially, I had mixed feelings about it. Although it was filled with history and the campus of LSU was beautiful, downtown Baton Rouge seemed to be rather quiet on weekends. (As I mention below, I was assured that, even in two years, there have been some dynamic changes in the city, and boy, were they right!)

But why exactly choose Baton Rouge, LA for this momentous occasion? I’ll tell you why. First, the Marathon Maniacs, a club filled with many wonderful zany runners (many of whom I call friends) chose the Louisiana Marathon as the annual “reunion” marathon. That basically meant sharing the love, excitement, glory, support and insanity with a few hundred friends. People who didn’t shake their heads at me and say “HOW MANY MARATHONS?????” They get the lunacy. They embrace it. They make me look sane by comparison. And, I like that!

Second, I recall the Louisiana Marathon from two years ago. Although it was an inaugural event, it had all those extra touches that only a smaller marathon can have.  From the race director, to the volunteers, to the people of the city – everyone greeted us with open arms. That means a lot to me. The marathon itself encouraged and promoted not only the swift runners, but those of all abilities and paces.  Although I finished the 2012 marathon at the back of the pack, there were still plenty of people cheering and whooping it up and enjoying a party atmosphere with food, beer and music!  Man, there was still a party going on. I appreciate that. Third, although I live in a large city, I love smaller cities that go out of their way to welcome guests. Last June, I attended a travel bloggers conference in Toronto (TBEX), and Visit Baton Rouge, the tourism board for the city, was an active sponsor at the event. Seeing how they supported and believed in bloggers, I contacted them and expressed my interest in visiting and exploring Baton Rouge in my capacity, not only as a runner, but also a travel writer. They welcomed me with the widest of open arms. They told me I should come back and see the changes – that the city was vibrant and growing.  They were bubbling over with pride and the enthusiasm was contagious – I wanted to visit and see the changes with my own eyes and write all about it. They were so right – the city is indeed flourishing!

Just imagine this: on Friday January 17th, after a full day of work, I flew to Baton Rouge (BTR) and arrived after 10 pm. I waited for the shuttle for the Hotel Indigo (don’t you love hotels that provide airport shuttles – even if they often make you wait a little too long?), and bleary-eyed I checked into the hotel. When I opened the door of my small but adorable room, I was shocked to find that it had been fully decorated for me – there was a basket of Louisiana Marathon souvenirs, $15 dollars of tokens to use at the Saturday Farmers Market and a Baton Rouge Museum Pass. BUT WAIT! There were also posters on the wall welcoming me and congratulating me on my upcoming 100th Marathon. “Geaux Kathy!!” Talk about southern hospitality! Could these people (especially my contact from Visit Baton Rouge, Christy) be any nicer or more generous of the heart? I think not. 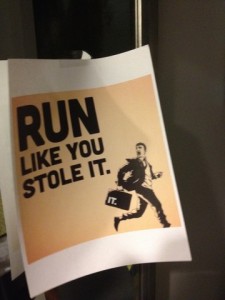 It is this sort of environment that makes for a perfect marathon. I had a memorable trip on so many levels. From being treated to 26 miles of beautiful lakes and homes at the Louisiana Marathon and being cheered and congratulated by strangers and friends alike — including an appearance on the race course by Won’t Run For Miles, who borrowed a hotel bicycle to find me at the 24 Mile mark of the marathon! Won’t Run didn’t run, but he cycled to the course to cheer for me!

Then there was the inspirational speech at the pasta party by Matt Long, who exemplified the meaning of determination and the power of the will to live! What more can you ask for? I also had the opportunity to visit an art museum, shop at a bustling farmer’s market, eat po boys and jambalaya, stroll past the old and new state capitals, walk on the campus of the new performing arts center, the Shaw Center, walk through an old casino housed on an old riverboat and tour an old war ship, the U.S.S. Kidd. It’s a wonder I had time to run, isn’t it?

In the next few posts, I will review my trip to Baton Rouge and the Louisiana Marathon in greater detail.

(note: the trip was a sponsored media trip and a portion of my travel and lodging was provided by Visit Baton Rouge. However, all of my opinions are my own).