Hi everyone.  It’s just another manic Monday, I wish it was Sunday….

This weekend was to be a quiet weekend. Saturday, I was determined to get out the door fairly early to go for a run, as rain was in the forecast.

The phone rings. It’s Won’t Run.  Remember that great blues rock band we saw playing at the Atlantic Antic Street Fair last year? he said.  I had no idea which band he was talking about.  Yes, of course I remember, I said.

He explained that the band, The Black Coffee Blues Band, would be playing somewhere upstate in Putnum County, New York, and that his friend Mark Bosch, a gifted guitarist, would be performing with the band.   Won’t Run asked if I could I do my magic and find us a hotel room for the night that’s not expensive?  So, here I was, in my running clothes, trying to get out the door, and what am I doing?  I’m on various hotel websites looking for available hotel rooms for that night.  I discovered that the Hyatt House in Fishkill, NY is only 8 miles from where the band would be playing, but it was fully booked.  (I note that the Fishkill Hyatt House is one of my go-to local Hyatt favorites – a nice category one hotel about 2 hours from New York City – less without traffic, but there always is traffic. The hotel is often fully booked with Hudson Valley weddings and Saturday was no exception).

I phoned the hotel and spoke to Michelle at the front desk.  She said that she was “waiting on” a possible cancellation.   She couldn’t make any promises, but would let me know.  She took my number and I crossed my fingers and headed out to Central Park.

About 4 miles into my run.  Michelle called and said a room had indeed become available.  She said that, from her end, since the hotel was listed as fully booked, she could only bring up the rack rate, but I was happy to call Hyatt’s main line to see if they could charge a Points & Cash rate.  Mile 4.5.  I phoned Hyatt.  Explained the scenario.  They put me on hold while looking into the matter.  Mile 5. The customer service rep and Michelle are both on the phone.  It was worked out – Points & Cash.  Mile 6. These ladies were magicians!

I arrived at the hotel and checked in.  We went to our room on the second floor.  This was the view. 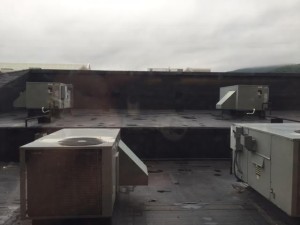 Jokingly, I posted it on social media.  Hyatt Concierge responded on Twitter and offered to be of assistance. I said that as much as I disliked the view,  I was grateful that the hotel had given me the last room and that they had given me the Points & Cash rate.  No, as much as the view left something to be desired, I really was a happy camper to be there.  (Surprisingly, I’ve never written a review of the hotel. I will.  Next time!).

By the way,  we really enjoyed the evening.  The Pantry in Cold Spring, New York, a coffee shop by day, sold craft beers and wine by the glass.  The band played phenomenal music on the porch, and we sat at picnic tables.