This post is part of the Around the World in 8 Days trip.  Here are related posts:

Around the World in 8 Days — > It’s Genesis, Planning, and Costs

What’s a Wine Drinker in the Czech Republic to Do?

On Day 3 of my Around the World in 8 Days trip, I visited Pilsen, a city about one and one-half hours by train from Prague –  a city rich in history and proud to be named the European Capital of Culture for 2015. To foreigners, the city is best known for the Pilsner Urquell brewery (created by Bavarian brewer Josef Groll in 1842), but there is more than that!

I woke early, as my train was at 9:15 am.  The breakfast room at the Radisson Blu Alcron hotel was bustling with cheery Germans, who, one after another, said guten morgen to me.  It turned out, most of them were on the same conference, all staying at the hotel. The food was amazing, but I just had a sampling, as I had to find my way to the train station shortly.

It was a short walk from the hotel across Wenceslas Square (one of the main squares of Prague) to the main railway station, Praha hl.n and I purchased a ticket relatively easily.  I was surprised to learn the station was named in honor of the former United States president, Woodrow Wilson!  In fact, the station was originally opened in 1871 and named Franz Josef Station after Franz Joseph I of Austria. From 1945 to 1953, the station was called Wilson Station. His statue stood in front of the station but was torn down by German authorities during World War II.  A new statue of Wilson was installed in 2012. The train ride was picturesque – I just gazed out the window at the scenery. My tour guide, Maria, met me at the Plzen Train station.  It was cold and windy, but we walked around the small city for about an hour and a half.  As we walked, Maria pointed out significant sights to me and shared interesting historical and cultural information with me. At the Museum of Plzen, I saw a Plzen Lamp, the first automatic electric arc lamp, invented in 1881 by František Křižík. We continued on through the paths, where I learned about the history of Plzen.  Maria pointed out Havel’s Place to me, which was created to honor the former President Václav Havel, and to signify and promote free speech and democratic dialogue.  There are nearly 10 comparable Havel’s Places around the world! We passed by a large mural, Theatrum Mundi, notable because it depicts historical figures from various times in Plzen’s history together in one painting. We made our way through this lovely small city.  Maria even took me to see a room-sized scaled model of Plzen. 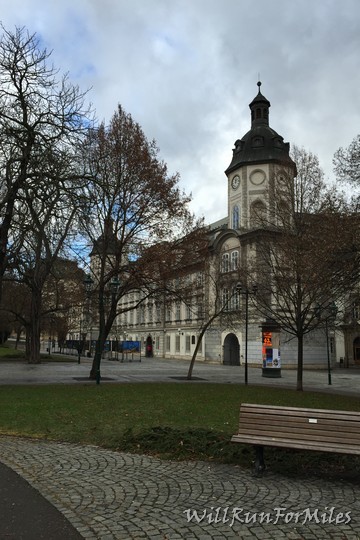 We passed by the Great Synagogue, the third-largest Synagogue in the world, surpassed only by one in Jerusalem and one in Budapest. I did not have the opportunity to go inside.  The building is now used for concerts and art exhibitions. Maria then left me off at the Pilsner Urquell headquarters for a 12:45 tour of the brewery.  That is covered in a separate post.

Disclosure: Czech Tourism Board covered the cost of the city tour and the brewery tour.  I paid for everything else, including my train fare to and from Plzen.